The Faces of the Tiger (Las caras del tigre)

A scientific investigation into the greatest mystery of mankind: the origin of man.

Matilde Gil is a technician at the Ajorca S.A insurance company. She receives an assignment to investigate the causes and circumstances surrounding a tragic accident in the mountains of Madrid between a passenger bus and a tanker truck loaded with propylene.

Among the evidence of the accident, they discover DNA remnants that are difficult to identify because they do not share 100% of their components with those of the human species. From there, Matilde and her assistant Pajarito will start an investigation to find out who (or what) the DNA belongs to.

They will use the images recorded at the bus station, the testimonies of the passengers who were on the trip and, above all, the endless theories and hypotheses of historians and anthropologists specialized in evolutionary issues, to find out the origin and the unknown whereabouts of the being to whom the remains belong.

It will be Dr. María Martinón, specialist in Human Evolution, who will suggest that it is very likely that the DNA belongs to a hominid species of Asian origin, which could provide an answer to some of the great questions of anthropology.

On the other hand, Matilde will have to combine the hard research with the grief caused by her recent separation and the extra effort to take care of her children and prove that she is a good mother. Something that her partner will not make easy.

Finally, Matilde and Pajarito will have to travel to Southeast Asia to find an unknown tribe of indigenous people and confirm that the person to whom the DNA belonged was a hominid subspecies that could explain and resolve major questions about the theories of evolution. But, for the welfare and safety of the aboriginal people, they will decide not to reveal any of their findings, to keep the secret, and thus prevent the bodies of science from exploiting their community.

RELEVANT DATA: In this novel, Alfonso Mateo-Sagasta uses his long experience as a historian and archaeologist, and real theories and hypotheses linked to evolutionism to incorporate high doses of veracity to the development of the plot of The Faces of the Tiger (Las caras del tigre).

In addition, the work has a strong, multi-layered female protagonist, with a well-spun development that breaks the molds of the archetypal.

"An original novel, with a well-paced development and an intense investigation into the depths of consciences of human beings fallen from the tree of evolution." El Periódico de Aragón (newspaper)

"Surprising plot, of an unparalleled liveliness. It continually provides thoughts and queries, and keeps you in suspense until the last page, with a surprising and moralizing ending." Lecturalia

Alfonso Mateo-Sagasta has won awards such as the First International Historical Novel Award , the First Espartaco Award of the Semana Negra de Gijón and the Caja Granada Historical Novel Award. He was also a finalist for the Violeta Negra Award in Toulouse. His works have been published in different countries and translated into other languages such as French and Italian. 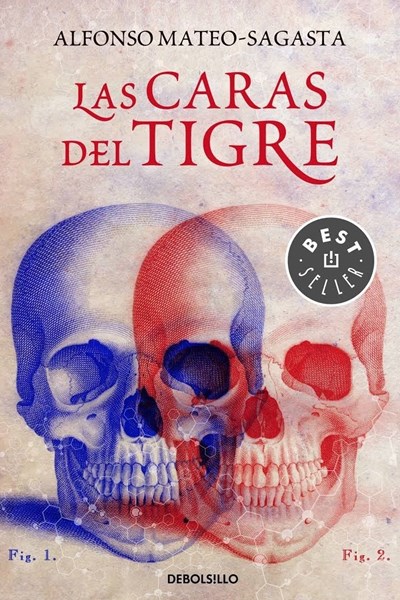