On the day that Ashran the Necromancer caused the conjunction of the three suns and the three moons, he killed every unicorn and dragon and seized the power in Idhún. However, the Idhunites managed to save two little babies, one dragon and one unicorn, and sent them to Earth, so that they could fulfill the prophecy that predicted that it would be a dragon and a unicorn that would save Idhún.

Years later, two exiled Idhunites, members of the Resistance, are still looking for the two creatures on Earth without any success, unable to go back to Idhún. During their mission, they meet Jack and Victoria, two teenagers whose destiny is irrevocably linked to that of Idhún. Together, they will have to find a way to go back to Idhún as they fight against Kirtash, son of Ashran and murdered of exiled Idhunites on Earth.

The saga follows the three teenagers in their fight to save Idhún from the hands of the Seventh God, incarnated in Ashran, as they learn to accept their true identities: just like Kirtash, who is half human and half shek (winged snakes, the creatures of the Seventh God), Jack and Victoria are the reincarnations of the dragon and the unicorn sent to the Earth, which means that their role in the fight is more important than they ever thought. So is Kirtash’s, for a second prophecy, kept a secret, announced that it would be a shek that would open the door of Idhún to the dragon and the unicorn. The love triangle between the three characters will complicate things even more.

During their adventure, they will find out that not everything is what it seems, that there are shades of grey and that perhaps they are nothing more than puppets of a divine fight that is much bigger than they are.

The story of Memorias de Idhún happens in four different places: the Earth, Limbhad, Idhún and Umadhún. Idhún is a very complex fantasy world, in the style of the Middle Earth, which has six different races, apart from the unicorns, the dragons and the sheks. It also has a very rich geography, with landscapes that go from frozen mountains to hot deserts. Limbhad is a limbo between the Earth and Idhún in which the Resistance has been trapped since Ashran closed the door to Idhún. Umadhún is the first world created by the Six, destroyed by their fights and is now an underworld full of caves. The sheks live here.

RELEVANT DATA: Memorias de Idhún is one of the most successful Spanish sagas of all time. The saga has been translated into French, Italian, German, Finnish, Hungarian, Korean, Turkish, Portuguese, Polish, Romanian, Danish and Norwegian, and it has sold more than one million copies. Moreover, it has been adapted to the comic format, and has many merchandise products based in the story, such as a board game, diaries and an encyclopaedia.

Memorias de Idhún has a legion of fans who call themselves Idhunites, who meet in Idhunite Meetings. On the tenth anniversary of the first book of the saga, SM published the book #soyIdhunita: El fenómeno de Memorias de Idhún desde su origen hasta hoy (The phenomenon of Memorias de Idhún from its origin until today, written by El Cronista de Salem, the greatest expert on the works of Laura Gallego in the world.

Laura Gallego is one of the most successful authors of the Spanish literary landscape. She has published more than twenty-seven books, which have been translated into more than sixteen languages. She has sold more than one million copies only in Spain.

The Idhún Chronicles is a Zeppelin TV production for Netflix. 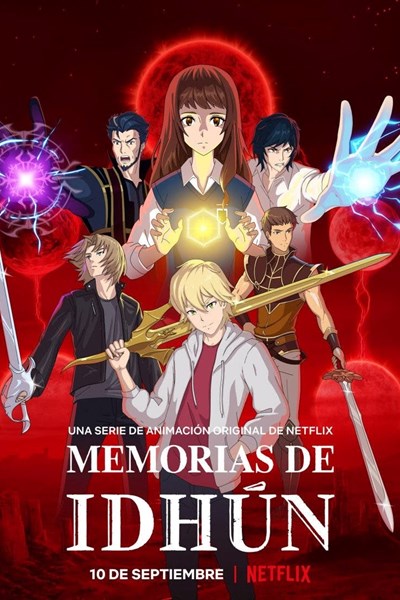