The Eagle´s Flight | Time is in your hands

Three possible successors to the crown… one single throne.

It is the year 1504. The throne of Castile will remain vacant after the death of Isabella the Catholic and its possible successors, hungry for power, will do anything and everything to have it. Juana de Castilla, daughter of the queen is not easily tamable and has a strong personality, traits in a woman that are unsuited for the time. She is forced to marry Philip the Handsome because of political alliances, and her chances of ascending the throne crumble when she is publicly declared a "mentally unstable person.

Against her mother's wishes for her to inherit the crown, Princess Juana of Castille will have to overcome all sorts of adversities in order to get what she wants. His father, Ferdinand of Aragon, is a charming, cunning and great strategist; but a monster nonetheless. So many years in power make Ferdinand willing to do anything to keep his place on the throne, even if it means removing his daughter.

The third and last candidate is Philip the Handsome, a hedonistic and egomaniacal man, who loves parties, hunting and his extramarital love affairs. A series of wrong decisions will make him seen as an enemy in Castille and his character will change as his distrust grows. All of this will lead him to a tragic end.

The triangle of power formed by the main successors to the throne of Castille is the foundation of this story. They are constantly anticipating its rival moves and conspiring against one another. A series of power struggles in which sex, violence, and crime are used as weapons to achieve their political ends.

RELEVANT DATA: The Austrias saga (Los Austrias) is comprised of The Eagle´s Flight (El vuelo del águila) and Time is in your hands (El tiempo en sus manos). In it, José Luis Corral captures all of the weaknesses of one of the most emblematic monarchical lineages in the history of Spain. In addition to conspiracies, betrayals, and all kinds of scheming, the author sheds light on a moment as emblematic as the creation of Spain as a nation. The saga has all the ingredients to become a successful, shocking and dizzying TV series as The Tudor (Los Tudor) or Game of Thrones. Moreover, it is a story that gives way for the development of several seasons, following the chronology of the different successors to the crown.

Jose Luis Corral is considered the master of contemporary Spanish historical novel, and his novels have been translated into several languages. He is one of Spain's most internationally renowned historians and is highly praised by literary critics.

He has received the Letras Aragonesas Award and the silver medal at the XXXIV International Festival of Cinema and TV of New York.

“José Luis Corral introduces us to those complex and eventful years with the expertise of a filmmaker who handles panoramic and interior scenes with equal mastery. The reader witnesses the splendor of the ceremonies, the battles, but also contemplates the intimacy of the monarchy, the emotions and the personal and daily life of the characters.” Todo Literatura (Digital magazine) 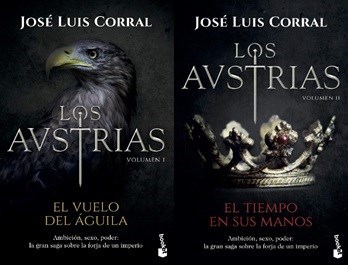